I was never a big “joiner” in terms of clubs and groups, and that holds true today. I definitely have a spirit of community, and I love socializing with colleagues and friends, but signing up for something I MUST be in attendance for every Tuesday at 7 pm for the next so many weeks or months has always filled me with dread.

But I couldn’t escape belonging to one club in high school: it was mandatory. Oh, the horror I faced, trying to pick something I could not only enjoy, but could be even okay at. Debating? Not on your life. Science? Um, that would be a big NO. Nothing to do with sports, thanks. But luck was on my side. That year saw the introduction of a new, previously unimagined club. Mr. S had done a lot of travelling before his teaching career, and, bless him, starting his first year at my high school, he was enthusiastic about bringing his knowledge of distant, intriguing worlds to any interested students in a small corner of Winnipeg. He started the Travelogue Club, and my name was first on the very short list. There were only ten or eleven of us like-minded souls in the club, and nothing was required but to sit and watch the slides he’d taken on his travels or reels of documentaries of life in other countries. He spoke of whirling dervishes in Turkey and the messy joy of taking part in La Tomatina in Spain. I learned that there really was a Timbuktu, and that the Tasmanian Devil was an actual animal and not just a cartoon character named Taz. There was no participation expected; all I had to do was watch and listen. And dream. At the end of each class Mr. S gave us a list of voluntary additional reading, both non-fiction and novels on the country we had just been subjected to. Perfect for me.

My parents were not travellers, nor did they appear to have any interest in leaving Winnipeg when I was younger. I watched as some of my friends went on family summer vacations, west to such romantic sounding places as Lake Louise and Banff, or east to the mystery of the Bay of Fundy, or all the way down to California to yes, you guessed it, Disneyland. I endlessly dreamed of adventures in new places, but it was impossible for me to envision my own parents taking us any further than fifty miles to a family get-together on a prairie farm, or, occasionally, a week hiatus to a rented cottage near one of Manitoba’s lakes.

Starting at sixteen, I did my share of hitch-hiking and driving in Canada and the US, but that wasn’t enough. I was obsessed with flying away from North America and touching down on basically any foreign land. Along with the sights and sounds Mr. S had installed in my head, my desire to travel was highly influenced by the music of the late 60s and early 70s: I wanted to board Crosby, Stills and Nash’s “Marrakesh Express”, I wanted to be taken to the heart of India as in John Lennon’s “India, India”, and I wanted to touch Cat Steven’s ‘strange and bewildering’ “Katmandu” (sic). My opportunity finally came when I was twenty-one. Because I had to count every penny very, very carefully, I found the cheapest flight I could: to Amsterdam on a one-way $99.00 student ticket. The only catch was it flew out of Buffalo, New York, and getting there from Winnipeg would cost way more than that flight to Europe. I heard about the friend of a friend who had been relocated to Toronto on a company move, but needed to get her car – and cat – there. She would pay for gas, food, and one night in a motel along the way (hello Wawa, Ontario). So I drove the car from Winnipeg to Toronto, accompanied by the endless cacophony of a car-sick, yowling Siamese.  From Toronto, I caught a bus to Buffalo and then on to its little airport. The plane left just before midnight on the student “champagne” flight, so-called because of the small plastic glass of something fizzy we were handed at 7 am as the overnight flight started its descent. It was all thrilling to me, and I knew, as I felt the exhilaration of the liftoff and the continuing excitement that kept me wide-eyed as the plane hurtled eastward through the night sky, that I would definitely be doing this again. And again and again.

And I have. The best thing about travel is that it’s never done. There’s always somewhere new. To quote Susan Sontag, “I haven’t been everywhere, but it’s on my list.”

People regularly ask me: did you have a mentor, someone who encouraged you to write? My answer has always been no, apart from that one Grade Five teacher who saw something in my writing and entered it into a radio writing contest. But did I have a mentor for my love – and life – of travel? Yes. Mr. S, the architect of that first Travelogue Club. I’ve often thought of his influence, and I’m sorry he never knew how much he inspired me. 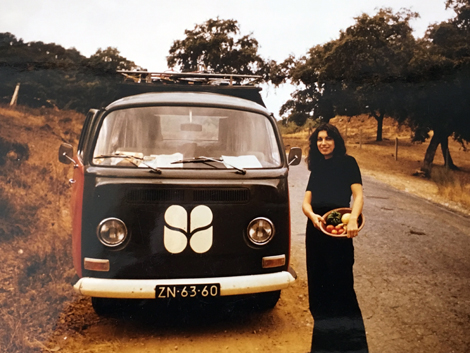 With my own “Magic Bus” on the road outside San Sebastian, Spain, 1973.