The Devil on Her Tongue 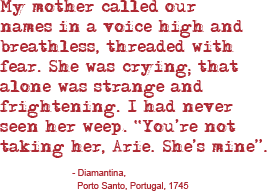 “Diamantina is 13 when her father, a Dutch sailor who washed up on the Portuguese island of Porto Santo, abandons her and her African-born mother and sets off for the New World. Unbaptized, tainted by her mother’s witchcraft and her foreign blood, the girl is an outcast who seems doomed in her struggle to survive. Diamantina refuses to accept her destiny and vows to escape her circumstances and forage a life of her own, no matter the cost. But can she live with the choices she has made? Diamantina’s odyssey to change her life is a sweeping narrative of starvation and plenty, cruelty and love, disaster and triumph.”

My love and life of travel is closely connected to the worlds I create. A story can come to me through spontaneous discoveries in books, or through old photos. I can be inspired by a character recurring in my thoughts, or by my interest in a historical period. Or I can be inspired through a country itself, as it draws me in with its current pulse and its whispering ghosts.

I didn’t know I was going to write this novel set in Portugal until I was travelling through it. For me, the joy in exploring a country is to have few plans, instead traversing its roads and exploring its cities and towns and countryside without expectations, looking, listening, tasting, touching. Dreaming.

Driving along the coastline of the Algarve, I steered in the direction of the most southwestern tip of Europe, the town of Sagres and, just beyond, Cabo de São Vicente – the cape that was known, to Portuguese sailors in earlier centuries, as the End of the World. Their ships set sail from here across the Atlantic, heading west to the New World or rounding the Horn of Africa and sailing east to Mozambique, to Goa or Macau. I stood on the edge of the cliff at Cabo de São Vicente, looking out.

It was a place of peace and wonder, with only the smell of the ocean, the soft taste of the salty wind on my lips, and the evocative sound of seabirds circling restlessly overhead. I felt a kind of reverence as I stared at the sea…and in those moments the first nudging images of my next story came to me.

I stood there for a long time, and tried to imagine what long-ago sailors might have felt as they sailed away. The only certainty for them was uncertainty. Would they ever return, ever see those they loved, or would they perish, victims of disease and piracy, mutiny and murder?

Would they become victims of the sea itself?

“This book had me at the opening sentence…never once did the pace falter or the characters disappoint.”
– Leslie Jones, National Post, Canada

“Beautiful prose and compelling characters made this a wonderful read…this lush story set in a beautiful, exotic setting swept me away. It is historical fiction at its best – moving, compelling, and engrossing.”
– Great Historicals, US

“Canadian author Linda Holeman’s latest novel, The Devil on Her Tongue, is a gripping blend of tragedy and triumph, secrets and revelations, and a confidence that comes from knowing that destiny is not determined by birth but rather by hard choices and perseverance… Interesting characters, enthralling scenery and a fast-paced narrative all combine beautifully to make The Devil on Her Tongue a satisfying read.”
– Historical Novel Society, US & UK