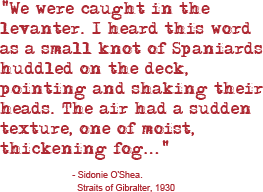 From the jacket:
“When a tragic accident shatters Sidonie O’Shea’s sheltered life in upstate New York, doctor Etienne Duverger helps her find hope again. Etienne introduces Sidonie to a world beyond her four walls and, as her body begins to heal, they fall in love. But when Etienne disappears, leaving nothing behind but a letter from Morocco, Sidonie decides to follow him to Marrakech. She embarks on a treacherous journey, desperate for answers. Yet nothing can prepare for her what she is about to discover, both about the man she loves and an unknown country steeped in mystery, magic and the darkest of secrets…”

Unlike my other novels, which found their beginnings with characters so persistent I had to write about them, this book began with a city. From the moment I stepped off the train in Marrakech, unprepared for anything more than another adventure and looking forward to learning about a new culture, I felt the city’s heat and rhythm and mystery wrap around me. Within a day, I knew that I would write a book set in this astounding place. With that realization I opened myself to Marrakech – and it was waiting. It  called to me; it sang to me; it whispered to me.  And so I wrote a story about Marrakech for Sidonie, so that I could uncover the secrets of the city with her.

The Saffron Gate is a novel about understanding oneself and realizing truths, and what we do with those truths. It is about Sidonie, Etienne, Manon, Badou, Aszulay and, yes, also Marrakech, which slowly but persistently made me understand that it was, indeed, another of my novel’s characters all along.
– Linda Holeman 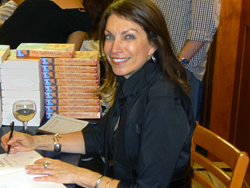 The Saffron Gate Launch at The Sultan’s Tent
Toronto, ON
November, 2009

“This book was a delightful surprise…It is 1930, and Morocco has only recently been ‘pacified’ by the French: it is exotic and dangerous. The Saffron Gate is above love and loneliness, betrayal and redemption, and also about culture shock and assimilation, colonialism, and above all about Morocco, its culture and its peoples.  It is worth reading as a travel book, but read it also as a page-turning mystery with an unusual denouement.” – Historical Novel Society, US

“Linda Holeman’s strength is a tremendous ability to create multiple plotlines and then weave them until they’re tied off in a satisfying knot…There are no holes in Holeman’s plots.  She also does her research, in this case giving the reader a brief history lesson on the French conquest of Morocco in 1912 and their maladaptation of the country’s system of slaves, servants, wives and concubines.” – Globe and Mail, Canada

“You need to know that this book is filled with intrigue, mystery, plot twists, love, hate and deception…each woven with the thread of destiny all the way through.  In the deep textured descriptions of Morocco you can literally taste and smell the dust in the air, see the deep velvet reds of Marrakesh, and the culture is brilliantly portrayed.  There is so much to experience and enjoy that by the end of the novel I had fallen in love with Morocco.” – Book Tooth, South Africa