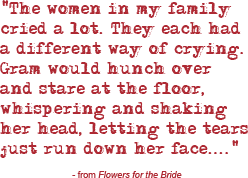 The short stories which make up Flying to Yellow recreate the big (and small) world of family relationships – the nuances, the silences, the subtle exchanges that exist between people who are together for the reasons that make a family – blood ties, love, necessity …

• a lonely woman intercepts a misdirected piece of mail and begins a correspondence with its sender, assuming a new identity …
• a young woman spends a weekend with her husband’s family and uncovers secrets that change the way she sees her husband, and herself, forever …
• a teacher in a small, French Canadian town finds herself forced to come to terms with the presence of her illegitimate grandson in her classroom …

These stories embody the unvoiced emotions that we have all experienced as children, siblings, parents and lovers – the thin web of the relationships which bind us together, buoy or bury us.

About the Cover of Flying to Yellow—
I was struck by this painting as a cover for Flying to Yellow initially because of the dynamic impact – its colour and vibrancy. As I studied it further, I realized how much character the girl’s face conveys. Her expression, particularly the slightly sullen posturing of her lips, is, to me, a cover for the vulnerability and hesitation communicated through her eyes. I feel this attitude typifies many young women, and relates well to the spirit of the stories which all involve women dealing with what life has given them. 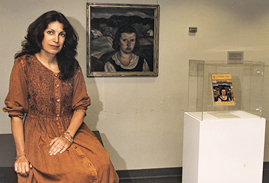 Linda and Flying to Yellow in front of the painting “Farmer’s Daughter” (oil on canvas) by Prudence Heward
—inspiration for the cover of the book
Winnipeg Art Gallery, 1996

“Though the book consists of stories that are firmly rooted in the quotidian, it ends in the miraculous. It is concerned, as its epigraph suggests, with what it takes “to be a woman in this life”: the stories its female protagonists tell themselves and each other are tools for survival … The larger movement of flight in this book is from shame to forgiveness, and from solitude to love. Yellow appears, finally, to be a kind of grace. Flying to Yellow has a hard-won and undeniable power.”
– Quill & Quire

“Linda Holeman is a talented writer…She has a wonderful knack, an uncanny ability to get her characters to reveal to her more than they probably should. And she has a gift for presenting intimacies and frailties in simple, matter-of-fact prose.”
– Prairie Fire