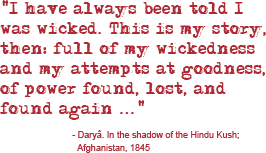 From the jacket:
Enthralling, unusual and richly textured, The Moonlit Cage is a novel you will never forget. It is the story of two people as extraordinary as the Victorian age they lived through. Daryâ is the brutalised but courageous young wife of an Afghan tribesman. She is a cursed woman, married under false pretences, for she is unable to bear children. But more awful than her barrenness is the punishment she will face when her husband discovers Daryâ’s curse. Knowing she must flee or he will kill her, Daryâ escapes.

David Ingram is an enigmatic Englishman, traveling in Afghanistan. Although he is a stranger to Daryâ, he is also the only man who can help her. He saves her life and, for reasons of his own, eventually offers to take her back to England with him.

With David by her side, Daryâ embarks upon the journey of a lifetime — one that takes her from the unforgiving valleys and mountains of her homeland to 1850s London, the heart of the mighty British Empire. And there Daryâ finds herself in an equally difficult position: can a girl who has navigated her way across the cruel landscape of the Northwest Frontier face what might be most perilous of all — the polite society of Victorian London?

The Moonlit Cage is a story of love, loss and redemption that will possess the senses to the very last page.

The inspiration behind the prose

The challenge I presented myself during the genesis of this book was multi-leveled. I wanted to write about a young woman living in a world completely different from mine: era, country, culture, language and religion. Since I chose to write this story in first person – which I personally prefer because of the immediacy and power of voice it allows – the difficulties were with me throughout the entire process.
The major issue was how to present Darya, a Muslim Tajik living a village in the shadow of the Hindu Kush in Afghanistan in the mid-nineteenth century. She would, by circumstance, be naive: uneducated and unworldly. And yet she needed to have an intelligence, confidence and intuitive understanding of the complexities of her life and the people in it. This strength and instinct would become necessary to guide her through the tenuous life of a woman viewed as useless, one who could not escape the secret shame of this worthlessness. And yet this strength would also not allow her to lose her faith and beliefs, even when the new worlds she was forced into made her deeply question whether letting go of all she had once believed might be her only chance at survival.
– Linda Holeman 2005 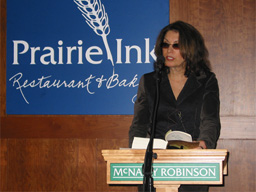 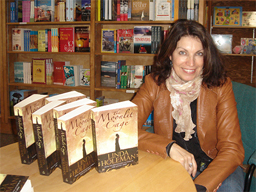 Amnesty International UK has chosen The Moonlit Cage as one of the “Ten Great Books on Human Rights”, along with To Kill a Mockingbird, 1984, The Help, and Mosquito.

“Holeman’s talent is evident in her attention to detail and mood. The Moonlit Cage is a well-paced, creative and addictive novel, with enough substance and depth to engage the cynic and the romantic alike.”
– Winnipeg Free Press

“This sweeping 1850s saga… contains most of the elements necessary to provoke thoughtful discussion: suspense, intrigue, passion, lust and extreme hate peppered with violence, combined with exotic travel and the beauty and grime of several different cultures, makes this a compelling and exciting read….This is definitely a book you want to talk about.”
– Globe & Mail, Canada

“Holeman explores the fate of a willful Muslim girl in this exotic and expansive coming-of-age historical tale…fans will appreciate the vivid rendering of tribal life and the sobering look at what it means to live where it’s believed “men are created to enjoy; women to give enjoyment to them.”
– Publisher’s Weekly, USA

“When we read The Moonlit Cage by Linda Holeman, we were absorbed by main character Darya’s timeless (and placeless) struggle for independence as much as we were captivated by its descriptions of the lush landscape and diverse cultures…But, perhaps most important, our heroine must find herself before she discovers true love, and for that, Holeman had us holding our breath until the very end.”
– Marie Claire Magazine, USA

“It is a thought-provoking book and gives an insight to the different cultures and the way women are perceived and treated so lots to discuss in reading groups. Overall this is anexcellent, well-written, moving novel that I would recommend to anyone.”
– New Books Magazine, UK

“A marvellous evocation of the times, this is absolutely absorbing.”
– Woman’s Day, Australia

“Breaking free from the golden cage…the tale of a young girl coping with life in a traditional milieu is engrossing as well as brutal.”
– Deccan Herald, India