Search of the Moon King’s Daughter

In this work of historical fiction, Emmaline Roke lives in England during the latter part of the Industrial Revolution. This time of great change, (roughly 1750 – 1850) was the dramatic transformation of society resulting from the bulk of the working population turning from agriculture to industry.

Emmaline’s early childhood, living in the small village of Maidenfern in Lancashire county with her father and mother, is rather idyllic. She imagines nothing will ever change. Her father is her idol; he teaches her to read, and she helps him run the village shop. Although her mother is a vibrant and fun-loving woman, she is easily led astray. Emmaline’s dream is simple – to stay in the village and perhaps take over the shop from her father. The birth of Emmaline’s brother Tommy completes the picture of the happy family.

But tragedy strikes as cholera travels through Maidenfern, and Emmaline’s dreams dissolve. She is forced in to the industrial city of Tibbing, close to Manchester, the hub of the cotton mill industry. There things go from bad to worse. Eventually Emmaline makes her way to London, on a “search” for someone very important to her. Her search is a journey which opens her eyes and her mind, and allows her to find a way to change her future.

I have always had a grim fascination for the dark times of the world’s history, and most especially when it involves the exploitation of children and young people. I set Emmaline’s story during the Industrial Revolution in England because this was a terrible time for young people – they were forced to give up childhood and work alongside adults when they were as young as three and four years old. The story involves life for young people living and working in the factory cities as well as domestics – “below stairs” in fine houses. The use of little boys employed as chimney sweeps is also an important part of this story. I did extensive research on this time in England, and was amazed and, at times, horrified by what I discovered.

I think that another reason I wanted to write this book was because I loved reading Dickens when I was younger, and many of his novels left images permanently etched in my brain. The extreme differences between the classes in British society of the past is so clearly and indelibly marked. One’s fate – luck on being born into the upper class, or misfortune to be born into the lower – was unchangeable.
People accepted their positions in life. But I wanted to create a character who could see beyond the narrow confines of her life, and be determined enough to recognize what she wanted, and strong and resourceful enough to fight for it.

Staying within the mores and customs of life in England in the 1830’s, I made Emmaline Roke a young woman who possessed a combination of youthful optimism and a clear, mature eye; of naivety and yet a dogged desire for understanding. It was a wonderful and fulfilling experience for me to write this book – Emmaline has been nagging at the back of my head for at least six years to write her story. I finally did.
– Linda Holeman 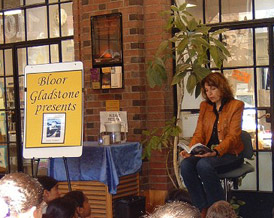 “Linda Holeman’s Search of the Moon King’s Daughter is a powerful recreation of life in 1830’s England…But this book isn’t just an exploration of 19th century England; it’s also the story of an extraordinary young woman and her ability to take responsibility for her family when the adults in her life…have failed her. Emmaline is an engaging character, one the reader comes to truly care for as the novel unfolds. On another level, hers is the story of a young woman’s search for her lost childhood.”
– Quill and Quire

“Set in industrial-era England in the 1830’s, Holeman’s powerful book has more than a few echoes of Dickens…It should establish Holeman’s reputation in the field of historical as well as contemporary fiction for young people.”
– Winnipeg Free Press