The year is 1900 and orphaned 14-year-old Rosetta and her beloved younger sister Flora sail from England as “home girls.” They are sent to Canada so that they can have a chance at family life. Their dreams are shattered when Flora is adopted but Rosetta is deemed to be too old. She is to become a farm worker, far from Flora’s new home.

Rosetta’s only dream is to find her sister. But slowly and against her will, she is drawn into the lives of the strange couple with whom she has been placed. It is soon clear to her that their home is full of fear and sorrow.

As her relationship develops with the farmer’s wife, Rosetta learns that true sisterhood can take many forms. The support the two young woman offer one another makes each one stronger until they find a way to follow their dreams.

After writing short story collections for both adults and young adults, Promise Song was my first novel for young adults. I was inspired to write it after coming across a reference to “home boys” in Annie Proulx’s novel The Shipping News, and intrigued by the description of these young boys being sent from England to Canada.

I was even more surprised to find out that this was a piece of Canadian history: the hundreds of thousands of orphaned or abandoned British children – boys and girls aged four to fourteen – who came with regularity to my country from 1868 to 1925.

Supposedly 11% of all of Canada’s population is now made up of descendants of these British children. Why didn’t I know about this? I started researching what I could find about Home Children – so called because they all were from British “homes” or orphanages.

Although the idea behind the scheme was to improve the lot of these children by taking them out of big city institutions and giving them a new family in the healthy Canadian countryside, the great majority of them were shamefully mistreated and simply used as cheap labour on farms and in small towns.
The research sparked my imagination, and I tried to imagine what it must have been like for these young adults and children, arriving in a new country without any real understanding of where they were or what would be expected of them.

Over and over I discovered that siblings were often sent to Canada together, and yet rarely were put into the same homes. Some grew up on farms only ten miles apart, or in neighbouring towns, but often weren’t aware of this until they found each other as adults.

This made the images start flying in my head, and I wanted to explore what might happen to an older girl who is wrenched from her beloved little sister, one she has promised to always love and protect.
And so Rosetta and Flora came to life.
– Linda Holeman 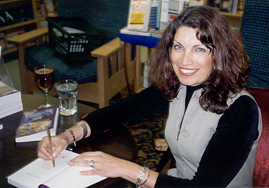