Where We Find Books – or Where They Find Us Part Four…

Oh Colombia, you captured my heart. A lot of people believe that Colombia is still the cartel-controlled, dangerous country of the 80s and 90s. It takes a long time for people to let go of the memories fueled by images and journalism, influenced even today by the Netflix series Narcos. But after the death of Escobar in 1993, the country began a renaissance which continues steadily, making Colombia a welcoming and friendly place. I’ve heard other travelers call it Latin America’s coolest secret.

I loved visiting the island of San Andres, and the cities of Bogota and Medellin, each place with its own history and interesting stories. But it was in Cartagena, the sixteenth century coastal city dangling into the Caribbean Sea, that I immersed myself in learning about the man who had written books I’d fallen in love with when I was much younger. Gabriel García Márquez, affectionately known as Gabo, lived only briefly in Cartagena, where he started his career in journalism. But when his family moved to Cartagena he became a frequent visitor, eventually building a home there.

I stayed in a hotel in Getsemani, a vaguely seedy, working-class but hip and utterly charming neighbourhood just outside the old walled city. Getsemani’s stone walls are covered in vivid, creative graffiti, a tribute to a city waking from a long sleep as it recovers the charm and vitality that García Márquez’s novels describe in such deep and resonating glory. 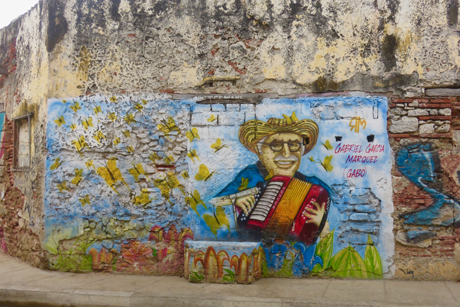 Cartagena was the setting of García Márques’ Love in the Time of Cholera, regarded by some as one of the twentieth century’s great love stories in literature. He’s admitted that he based this fictional tale on the courtship of his own parents. 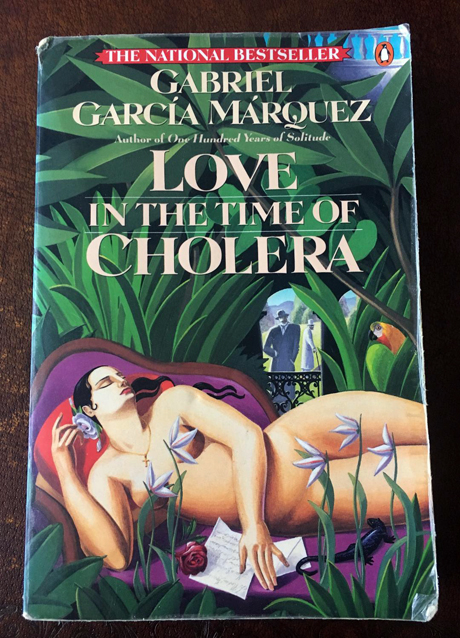 My own second-hand edition, bought almost thirty years ago. There may be a few tear-stained pages…just saying.

Although I own a number of Gabo’s works, I decided to look for more around Cartagena’s Old City. And I was always rewarded, not just by finding copies of his works in Spanish and English, but also by the places I found them. 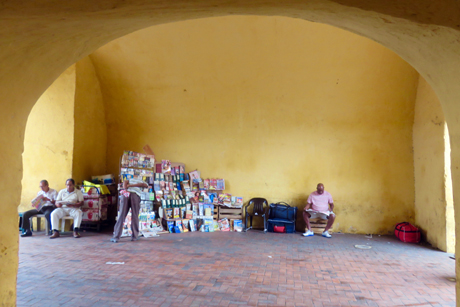 By this photo it appears that any place to sell books will do. This bookseller had set up his “moveable feast” (although of books, not food) just inside the Old City gates.

Wandering the tangle of narrow, bustling streets, made glorious with colourful, flower-filled balconies on old colonial houses, I stumbled upon Abaco: Libros y Café. Although small, books are stacked from the beautiful stone floors right to the rafters. It’s a welcome respite from the Colombian heat, and the hushed atmosphere immediately brings a sense of calm after the slightly chaotic commotion on the streets outside. 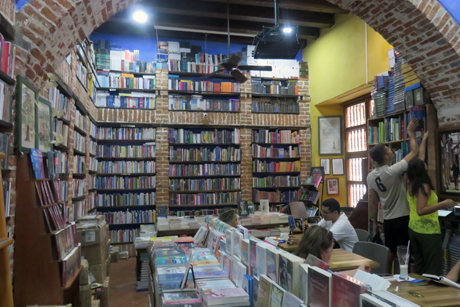 As well as recently published, second-hand, and even a few rare books, there is also a selection of reproductions of maps (don’t get me started on maps; they are a secondary love after books). It was difficult to leave this place empty-handed. And…I didn’t. 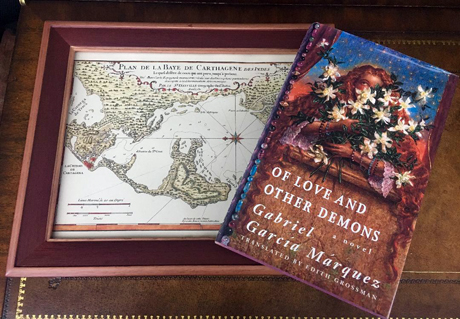 García Márquez was inspired to write this 1995 novel, Of Love and Other Demons, after his year in Cartagena in the late 1940’s. As that young journalist, he was sent to investigate the grisly discovery of the skeleton of a young girl with seventy feet (!!!) of copper hair, buried under the floor of a 17th century former convent. In what had become his trademark, García Márquez combined myth and reality in this novel. He’s been said to “tell the truth through inventions and make-believe”: his own style of magic realism, in which he treats the extraordinary as completely natural.

As I walked back to Getsemeni, right across the street from the Old City gates I discovered a full block of pop-up stalls of books, reminiscent of those that line the Seine in Paris. 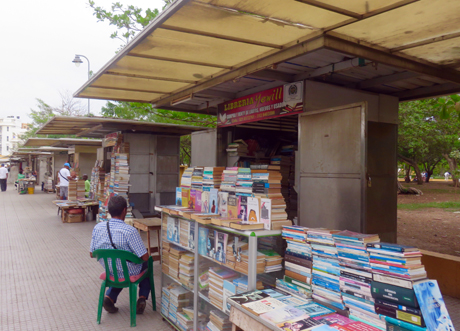 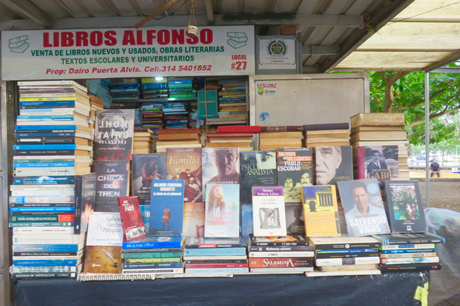 I found both novels by Gabo and non-fiction about him in this stall.

It felt lovely to walk some of the paths García Márquez walked as he worked out his themes and mysteries, whether under the shade of almond trees by day or in the warm, breezy nights with the scent of roasting meat and spices from street vendors. And by the end of my time in Cartagena, I was certain in my conviction that his work reflected his belief in the enduring power of love.