Where We Find Books – or Where They Find Us 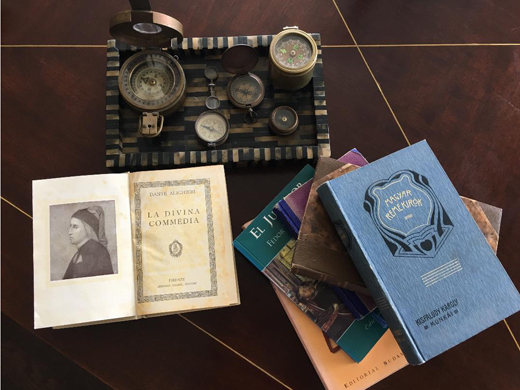 Over my lifetime of travel, I’ve often tried to find a book written by an author of the country I’m exploring. Naturally they’re written in the language of the country, and I can’t read them, but I love looking at them in my “foreign edition” bookshelves. I will admit that I’m pretty crazy about organizing and reorganizing my bookshelves in the way of most bibliophiles, and also will tell you that I get a definite rush by simply holding my 1925 Edizione Florentia copy of Dante’s La Divina Comedia.

Last year, as my daughter Zalie and I left Canada for a month-long adventure of some of the Balkans – Croatia, Macedonia and Albania – as well as Georgia and Armenia, I imagined I would uncover something exciting for my collection. We flew in from Tbilisi, Georgia, landing in Skopje on a steamy August morning, as the sun was starting to make an appearance over the landlocked Balkan nation of mountains, lakes, and ancient towns in the country known internationally as FYROM, the Former Yugoslav Republic of Macedonia. Before the breakup of Yugoslavia, I had travelled through all the narrow roads of the country, and was curious to revisit it. 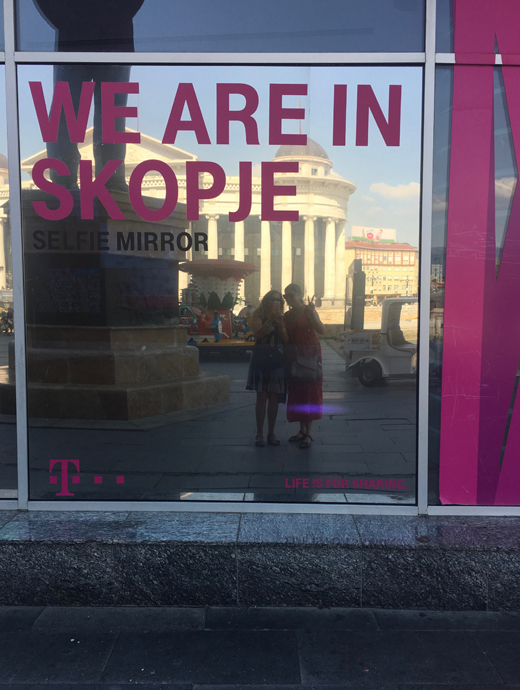 We first explored the Old Bazaar, connected to the newer city of Skopje by the 15th century Stone Bridge over the Varder River. We loved the small, ancient place, with its 1492 Ottoman-era Mustafa Pasha Mosque as a focal point on a plateau above the Old Bazaar’s tiny winding streets. We got lost and found and lost again in those atmospheric cobbled lanes, standing still to listen to the overlapping, echoing calls to prayer from the many minarets.

Back in modern Skopje, we found city squares of smooth, shiny marble teeming with elaborate neo-classical structures and towering columns with ornate details.  There are marble and bronze statues of the known and unknown, from Mother Theresa (who was born in Skopje in 1910 and lived there until, at eighteen years old, she left for her life vocation in India) to a shoe-shine man to a bull reminiscent of New York City fame. The piece de resistance is the massive statue of Alexander the Great, currently the largest in the world, although Greece claims they will soon outdo it. There are also abstract human forms, artistic and full of life – and some just a little bit creepy – near the new theatre. The city has undergone a massive reconstruction, and most of these statues are a result of Project Skopje 2014. Along with the over-abundance of statues, there are fountains, massive, multi-tiered fountains, with lions and horses and mothers  and babies. The physical scope of the city was almost overwhelming, in spite of the lack of people. Perhaps it was too hot, or perhaps it was holiday time, but the city streets had an air of emptiness. 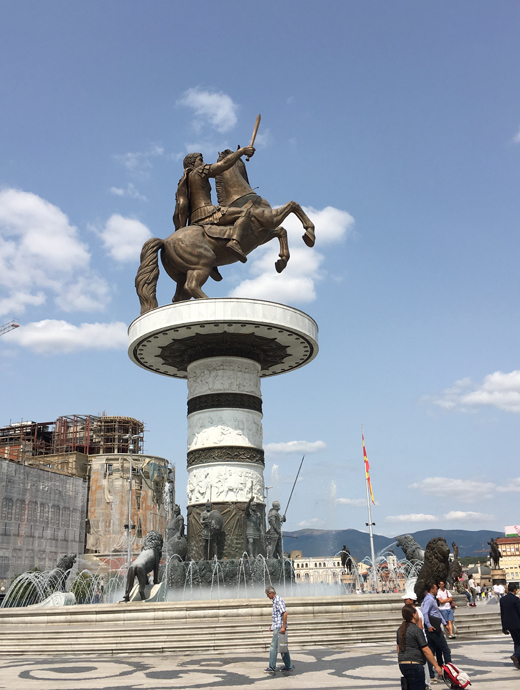 Alexander the Great – AND fountain!

We finally stopped at a small café to cool off with glasses of frosty Macedonian beer, with its undecipherable name. Standard Macedonian, the official language of the Republic, was implemented in 1945, and its alphabet is an adaption of the Cyrillic script, unreadable to our English alphabet sensibilities. I’d had no luck in coming across a bookstore on either side of Stone Bridge, but as we sat sipping our beer, looking across the square, there they were: books. Hundreds and hundreds of books, but not in a bookstore. These volumes were simply under an awning on the street. They were stacked and piled, leaning and threatening to tumble. During the hour we sat at the café, nobody stopped or even glanced at them. Clearly the stacks of books were as much of the local landscape as the statues and the fountains, but they were more exciting to me than so much shining marble and rushing water. 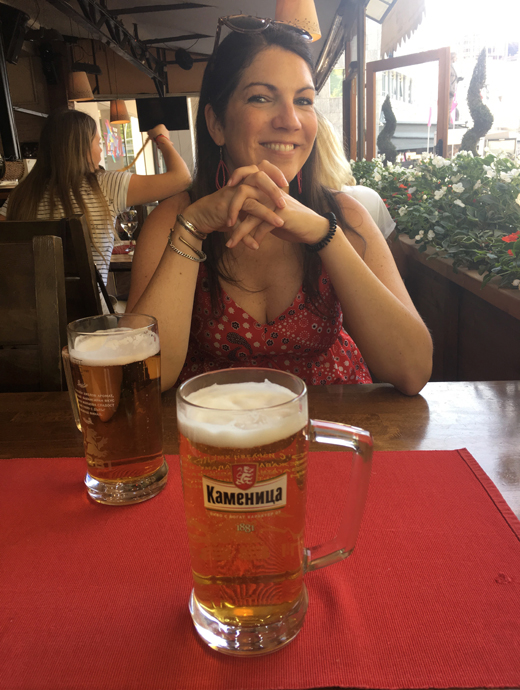 We went over to it, and I kept saying Slavko Janevski to the woman sitting beside the books. I had discovered that he’d written The Village Beyond the Seven Ash Trees in 1952, and it was the first novel to be published in the Macedonian language. But the woman just shook her head and shrugged, pushing another book into my hands. I finally bought it, although naturally, like the name of the beer, it was Cyrillic, and I couldn’t read the title of the book, or the author’s name. 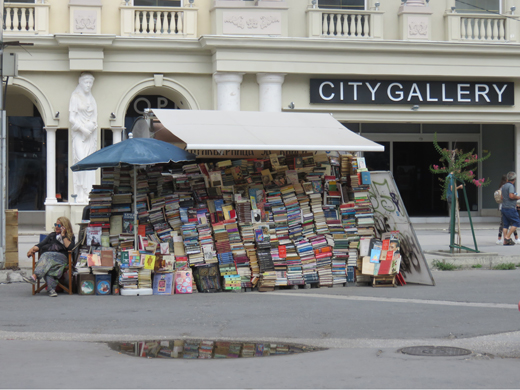 But that was as much as I needed. I had bought a book written in Macedonian, and walked away from that small square in Skopje happy, even though I didn’t know what I had bought. And it still brings me pleasure to look at that unreadable novel in my shelf today. That’s kind of how it works when books find you.