Testing the Future Waters…
In my previous post, I shared the story of my first publication: “An African Adventure.” I was ten years old and the story was a few hundred words. By age thirteen, I was trying to broaden my writing horizons, and thought it was time to start my first novel.

I found these pages stored in the one small box I have – the memory box, if you will. It’s about the size of a small printer box. It’s travelled with me to every home I’ve lived in, or been stored somewhere between moves. I have nothing of my childhood or adolescence apart from what’s inside it. One box. That’s it. I remember some of my favourite things, and now rather mourn them, wishing I could see them again out of pure nostalgia. There was a little jewelry music box shaped like a pagoda, with a tiny geisha spinning inside her black lacquered home, a microscope and slides, a flat cardboard box with gemstones glued into separated squares (I’m not sure why I loved that, but it left such a strong impression that it’s showing up in my novel-in-progress), a set of wooden castanets painted with large, gaudy flowers (I never did get the hang of them), and a chocolate-brown ceramic piggy bank. All of those things disappeared, without a trace, as the saying goes.

But I do have my box, and everything in it is paper. There is one book, and one only: the used copy of Greyfriar’s Bobby I bought for myself at a church basement sale when I was seven or eight. There are some report cards – the less said about those the better, yikes. There’s a stack of my Royal Conservatory Music diplomas and some old theory books. There are a few ticket stubs and paper flowers from school dances. And then there are the things that I wrote.

A construction paper booklet of rhymed four-lined poems, with pictures I drew and coloured, tied with red yarn was my first attempt at creating a book. There is a “two-year” diary from when I was nine and ten. It’s very small, and has five days to a page. By the lack of writing space, it’s clear this was a diary created for children with little happening in their lives. I dutifully filled out a lot of those pages with dull one-liners: “Went tobogganning (sic) with Randy and Tim. Cold.” There is my first story publication – see above, the awkwardly named African Adventure. And also my first shaky steps at writing a novel.

I was thirteen. What did I love to read about when I was that age? Without fail, the protagonist was brave and determined and competent, orphaned or in some sort of “cast out from home and alone and in danger” situation. Setting? A place foreign to me. Hopefully exotic. The plot might have focussed on trying to find or connect with a lost loved one, or it might have been the struggle for survival against human or geographical danger – and in the best case scenario, a combination of both plot points!

Oh, wait. Isn’t that what I write about now? Wow – I’m currently writing about what was dearest to my heart as barely an adolescent, decades – and I mean DECADES – later. That speaks very strongly to where our life-long passions lie: what interests us, and what we want or need to explore.

So the plot of my first novel goes something like this: Jaimie, a plucky Canadian girl, orphaned (of course) but sent to live with a cranky and unloving (naturally) old aunt in England (here we go, forced to leave all that is familiar) travels to Barcelona (another journey, this one getting exotic), and while there, discovers…well, I didn’t get that far.

At that age I had graduated to reading classics, and had discovered England through Jane Eyre (orphan), Oliver Twist (yet another orphan) and Pip (ditto) from Great Expectations. As to Barcelona? What did I know about Barcelona, or anything Spanish, for that matter, apart from those castanets? I would have used the “B” encyclopedia at the library to find out what Jaimie might experience: what she’d eat and drink and what the air smelled like and the look of the buildings and how the people were unlike any she’d previously known. I clearly liked in-depth researching in what I was interested in, even at thirteen. I still love researching. See where I’m going with this?

There are about six pages, written on unlined yellow paper. The novel starts with Jaimie on a rocking train from England to Spain (active beginning) thinking about her dead parents and former life in Canada (backstory). In Barcelona, she’s immediately and shockingly lost (promising hook) on the winding, beautiful, and yet at times threatening streets. And that’s as far as I got. I wonder now: what was Jaimie’s goal, apart from surviving? What was the conflict, apart from being alone and frightened in unfamiliar terrain? What would her character arc have been?

Some things are an intrinsic part of who we are. Could anyone have made me want to research and write a novel when I was in grade seven or eight? By Junior High, I was not a keen or particularly accomplished student – and I have the report cards to prove it. I did only what was necessary to get by. All I really wanted to do was read – and, in this case, write – and not be bothered by pesky homework assignments and what I deemed to be uninspiring class projects.

Finding these pages made me wonder why I let my beloved gemstone box and microscope and other treasures disappear, and kept those messy, hand-written pages. Was it a small voice in my head telling me that this really wasn’t the end? Okay, it was the end of this novel attempt, but it wasn’t the end of writing for me in the same way that jewelry boxes and piggy banks are naturally outgrown.

I think I knew I was on to something, even at thirteen. 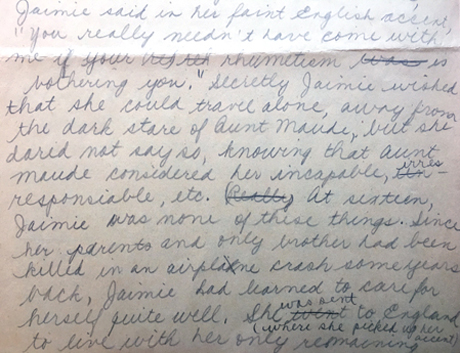