Spain Then and Now…

I realize that while this is a writing website, it’s also a travel website. I can’t deny it. The time I spend travelling is as important to me as the time I spend writing: I absorb writing inspiration while I’m travelling, and travel inspiration while I’m writing. As I’ve stated elsewhere on this website, those two aspects of my life are hard to separate. I don’t want to write about the daily slog of sitting at my desk, writing and deleting, writing and rewriting, writing and editing, and then deleting and writing again. It’s as tedious as that sentence. Right now I’d rather concentrate on the thoughts about writing I have while travelling.

Once I was home from San Miguel de Allende in February, I had a quiet six weeks of working steadily. And then I had to leave again. I don’t know how to explain this wanderlust to anyone who doesn’t have it. For those of you who also know it, no explanation is necessary. Of course, travel doesn’t just happen. It requires a lot of planning, and the knowledge that there will be lost work time, and being away from loved ones and friends, and the big one: the financial stress. Long ago I made the decision that should I be lucky enough to be able to put aside a small vacation fund whenever possible, I would not spend it on vacation, per se, but on travel, which for me is invigorating and mind-expanding. Lest anyone think I’m sounding high-handed…hey, I love sitting on sandy beaches or beside refreshing pools, rum or tequila-based drink in hand, as much as anyone. I just keep thinking I can do that later. I’m not sure what later means. When, exactly, is later? I just know that a supposedly relaxing holiday doesn’t satisfy me for longer than a day or two.

So my next creatively inspirational trip was in May, to Spain’s Andalucía, the only European region with both Mediterranean and Atlantic coastlines.

When I think of Spain, I realize that many of my images come from Andalucía, with its lilting flamenco guitar, the sweet smell of oranges and church incense, the taste of bone-dry sherry and flaky fish. There is its complex combination of Christianity and Islam, with ruined palaces and Moorish monuments created by the Berbers and Arabs who crossed into Spain from Morocco and North Africa and occupied the regions for over seven centuries. Seven centuries sounds like a long time when we think of Canada as having its centennial in 1967. 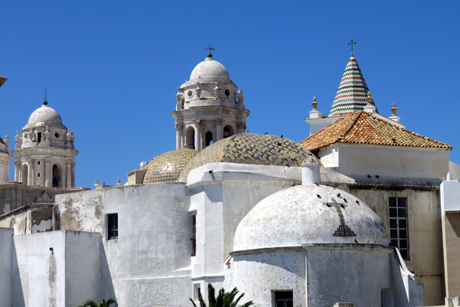 I landed in Madrid. The city is mind-blowing, art everywhere: the Prada and Museo Thyssen-Bornemisza and Museo de Arte Reina Sofia, to name the most famous galleries. For great food and drink there are endless restaurants, and the lively and charming Mercado de San Miguel. There is flamenco, and for some there is bullfighting. That blood sport strikes me as a terrible gladiator or Christians-against-the-lions scenario, when you know going in you will be witnessing death. I’ll take flamenco, thank you. 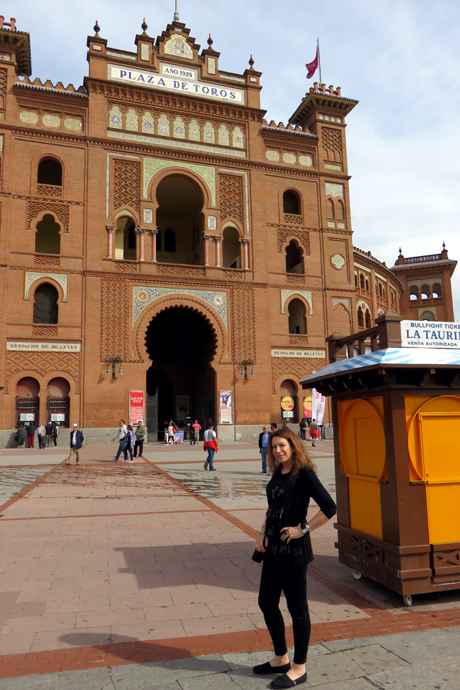 Outside Plaza de Toros de las Ventas in Madrid – with no intention of entering!

I was really anxious to revisit the cities of Andalucía I’d seen decades earlier, when I was a far younger and much different person. I was more impressionable but less involved as I travelled all of Europe and parts of the Middle East back in the 1970s. It truly is the old adage – I think it was Einstein who said it – the more you learn, the more you realize you don’t know. In the seventies I hadn’t had time to learn enough to realize how much more there was.

And so after Madrid we headed directly south, into the Iberian Peninsula and the dream journey through Andalucía’s Golden Triangle of Seville, Cordoba, and Granada. I knew that each of these cities possessed ancient mosques now masquerading as churches after the Catholic take-over by Ferdinand and Isabella, as well as vast palace complexes with the same Moorish influenced architecture – and I wanted to see them all again, with new eyes. 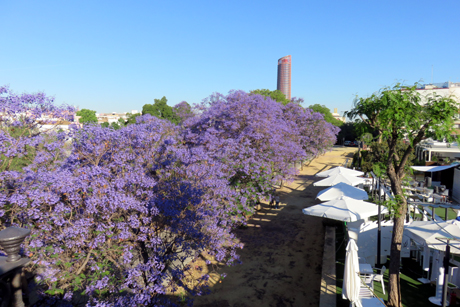 Seville is alive and bustling from early morning to far into the night. Its old city boasts the Seville Cathedral, the grandest of all Gothic cathedrals – where I saw the resting place of Christopher Columbus’s bones – and the Cathedral’s Giralda tower. I did climb all the way to the top, made easier by the fact that the massive bell tower is on a circular ramp, built so that donkeys could carry up elderly bell ringers in the past. In spite of that ramp, there were times I longed for my own donkey. But the view over all of Seville from the top was worth the climb. 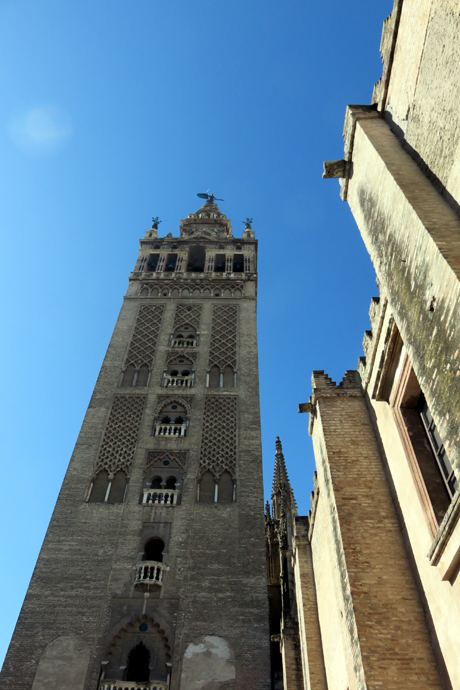 As well as the Cathedral and Giralda, while in Seville a visit to the lushly decorated Alcazar is a must, and afternoons wandering the plant-decked, tangled alleyways of Barrio de Santa Cruz, the medieval Jewish quarter, stopping for cool libations in the shade. 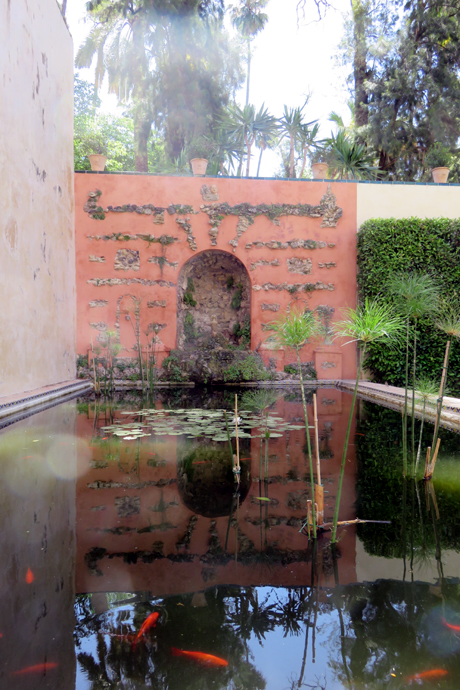 From Seville we pushed on to Cordoba, with its amazing Mezquita, the grandest and most brilliant mosque constructed by the Moors. Its peaceful, spacious interior was designed to let the spirit roam free and communicate easily with God. There is a definite mystical – or perhaps magical – element.  With its labyrinth of stone palm trees and bi-coloured arches I definitely felt a sense of the miraculous. 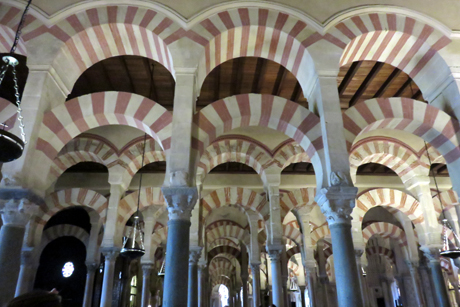 The third major city in Andalucía is Granada, built on the slopes of three hills, and lying in the shadow of the Alhambra.  There’s a sensuality to the Alhambra, a glorious Moorish palace filled with reflective pools and hidden gardens and broad pillars which create the perfect spots for a secret rendezvous: it’s easy to imagine trysts in the flower-scented atmosphere. 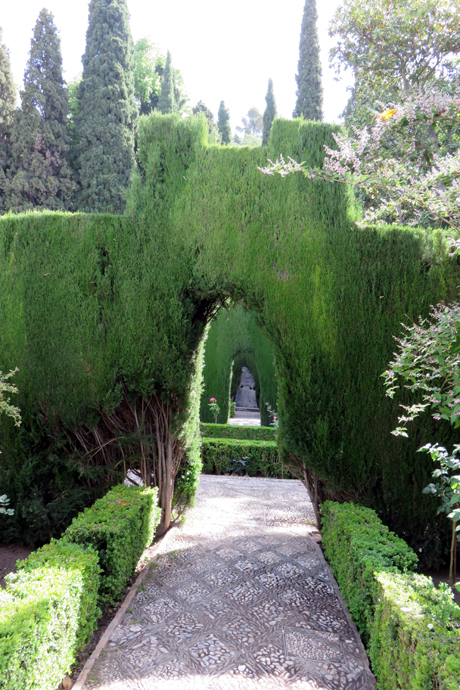 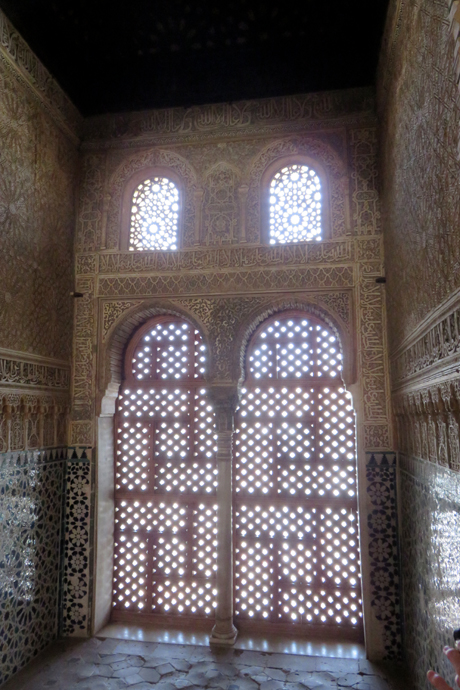 American author, historian, and diplomat Washington Irving travelled to Granada in 1828, researching a book about the city’s history. He fell in love with the Alhambra, and due to his celebrity status was granted access to write in a room within the palace. He was so inspired by his experiences there that he wrote Tales of the Alhambra, a book combining description, myth and narrations of real historical events. Washington did not believe his writing would ever do the Alhambra justice, saying, “How unworthy is my scribbling of the place.” Published in 1832, the book was instrumental in reintroducing the Alhambra to Western audiences. I find it so cool to discover these small but unexpected stories about the influence of place. In my historic novels, I have always focused on place as one of the characters. 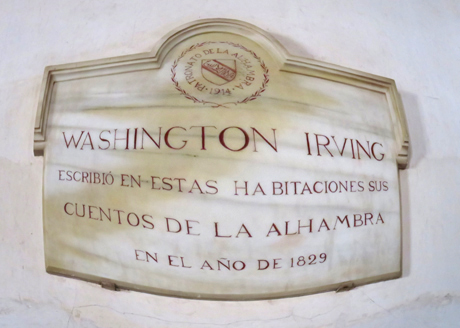 Translation: “Washington Irving wrote his Tales of Alhambra in these rooms in 1829.”

There’s an inexplicable romantic broodiness to Granada that spoke to me as we wandered through the Albaicín. The old Moorish town is a fascinating quarter, full of deserted, narrow alleyways with the Alhambra a glorious backdrop seen through each lane running down to Paseo de los Tristes – Promenade of the Sad – so named because funeral corteges used to pass through here on their way up to the cemetery behind the Alhambra. 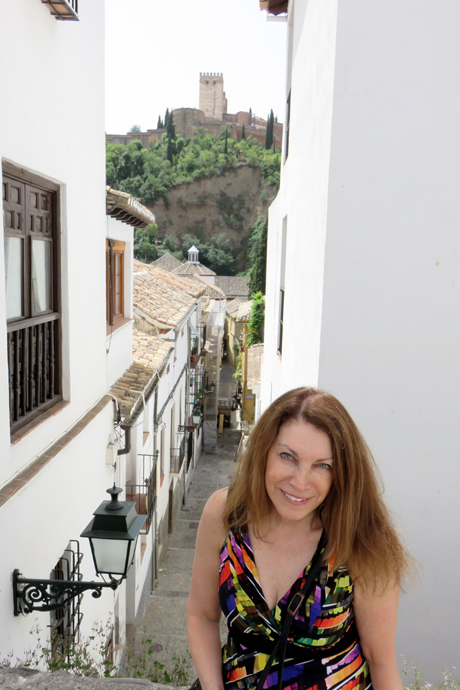 In the Albaicín, with the Alhambra visible

Away from the major cities, travelling the roads connecting smaller towns, I understood the huge, unyielding scale of Andalucía, with its chain of white towns scattered like pebbles through the dry, craggy landscape.  It seemed that in these sun-bleached villages life hasn’t changed much since playwright and poet Federico García Lorca envisioned his play, Bodas de Sangre – Blood Wedding – a tragedy of choice, deception, and fate, all culminating at a wedding. And Lorca described his poetry about southern Spain as a “carved altar piece” of Andalucía…“that hardly expresses visible Andalucía at all, but where the hidden Andalucía trembles”. Lorca never stopped searching for the elements of Andalucía culture, trying to write about its essence without cliché.

We explored Carmona, with its grand if ruinous fortified gateway, Puerto de Sevilla, leading into the historic old city. Within the walls, narrow streets meander past Mudejar – a particular style of Iberian architecture and decoration – churches and Renaissance mansions. 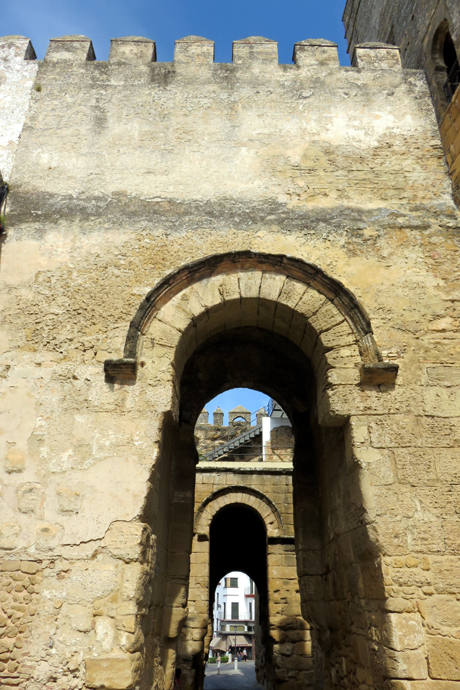 Another day found us in Cadiz – a breezy, visually compelling city on the edge of the sea, although with the slight edginess that is part of a port town. 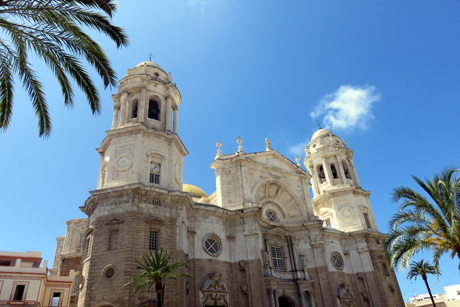 And there was a stop for sherry tasting at the world-famous Sandeman Winery in Jerez de la Frontera, a town known not only for its sherry, but as the capital of Andaluz horse culture. And it’s also known for the writer Manuel Moreno Barranco, whose extensive work ended abruptly when, at age thirty, he died violently in the prison of Jerez in 1963. The most compelling part to this story is that there was never a real reason for his imprisonment, apart from the suggestion he was a communist, and there is no evidence that he actually died by throwing himself over a balustrade, as the prison maintained. This in itself sounds like a story worthy of being written! 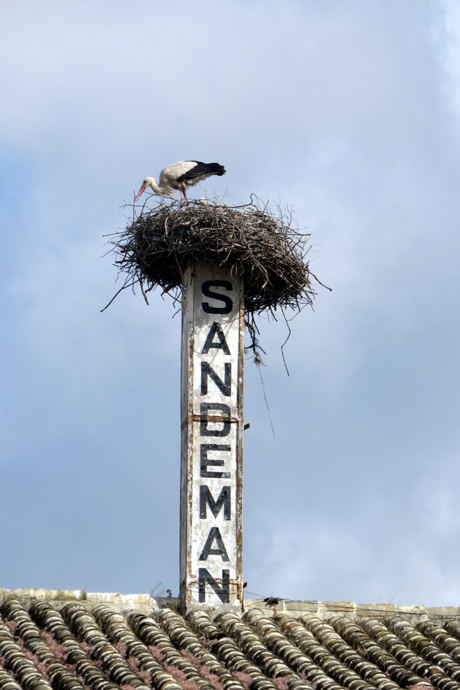 A stork nesting on the chimney is always good luck.

So much of Andalucía did have mystery and intrigue and a kind of unearthly presence. In every city and town I could envision life as it had been all those centuries ago. Although much has changed, much is still close to how some things must have always been. The Moorish architecture of the buildings is still the same. The narrow, twisting passages in all the barrios are still the same. Incense and roses still smell the same; garlic and oranges still taste the same. The purple blossoms of the jacaranda lining the streets of Seville and the restless, tossing green sea of Cadiz and the brilliant blue of the sky over all of Andalucía are still the same. The only real thing I know with certainty to have changed since I was last here so many years ago is me.

As it should be. 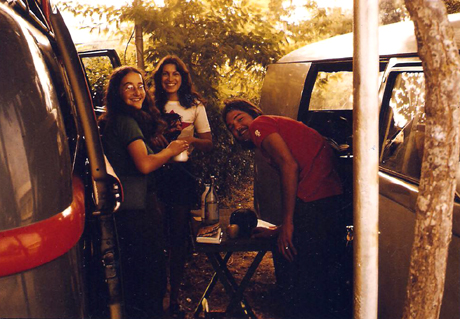 Me in Frank Zappa t-shirt – with friends outside of Cadiz, October 1973